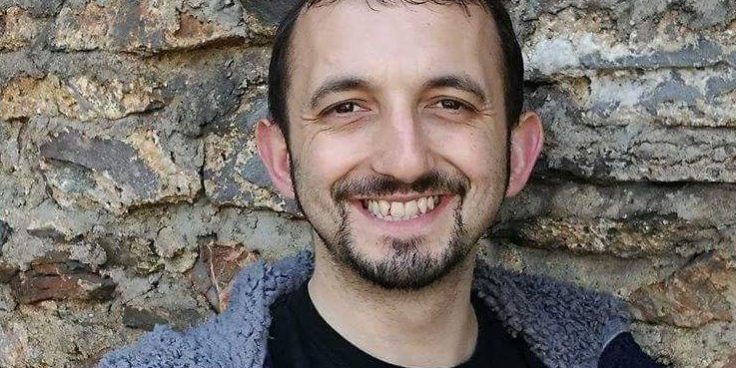 Seeing as how we’ve just managed to sign this amazing author for his second book with us we thought now is the perfect time to introduce everyone properly to Chris Tetreault-Blay, author of It’s A Long Way to the Moon!

I guess the one thing I love most about being a writer – or about life in general, really – is how easily you can find inspiration. Especially when you’re not even looking for it.

I never intended to become a writer, but I remember during the earliest interviews I gave (shortly after my first book was published in 2015), when I was asked why I had decided to start writing, I cited my children as my main inspiration.  The truth is, they inspired me even before they were born. Comically, I can remember the day I first decided to put pen to paper on my first story was the very day my wife told me she was pregnant. The fact that that moment signalled the start of me writing an apocalyptic horror trilogy might go a long way to explain where my head was at right around that time (!)

The truth was I had known for a while that I had ideas bouncing around my mind that were dying to break out in one form or another, but I had no direction for them. No purpose. Once I knew I was going to be a father, my first thought was to create something that one day they could look back on and say – hopefully with a smile on their face – “My dad wrote that!” Even if I knew it would be many years before they’d be allowed to read any of the first five books I had published.

Ever since I began telling people I was working on a children’s book – as much as two years before ‘It’s A Long Way To The Moon was even released! – I have been met with the same question many times over: how did I go from writing horror fiction to a children’s bedtime story?

Easy answer number one – I had always wanted to write a children’s story. I have long thought this market to be one of the most challenging as a writer. Children, after all, are the most honest – and often brutal – of critics. Kids will tell you exactly what they think of something, especially if they love or hate it. As a writer, I couldn’t ask for a more perfect target audience. I thought that if I could succeed by writing a halfway-decent story that they would like, I would feel an even greater fulfilment than writing for an audience my own age.

Answer number two – as I stated in my opening sentence, inspiration simply found me one night. Seemingly out of nowhere. My wife and I were getting ready to go up to bed, turning off all the lights and closing the curtains, when I found a moth fluttering around. I helped to guide him out the door by turning the lights off so that he would be drawn somewhere else. As I watched him fly away, I noticed the full moon and flippantly commented to my wife, “Do you think that moths sometimes get confused and try to fly to the moon, thinking it to be a lightbulb?”

Although the idea didn’t hit me at that exact moment, the comment I made stayed with me for a few days and I started to plot ideas for a lonely moth who decided to take that very epic journey one night. My wife told me I should write it all down.

So I did. Over the next three weeks, I made notes whenever they came to me. The book was actually written on a ‘sticky notes’ app on my phone. Thank heavens for modern technology, eh?!

Again, my children played a big part in the making of this book in many ways. Firstly, their love for bedtime stories led to my love and appreciation for Julia Donaldson. As a parent, I found the rhyming nature of her books so much fun to read. Even now I am still tempted whenever I see one of her books on a shelf in a shop, just waiting to be heard.

I hadn’t intended on specifically writing a rhyming children’s book but as the images started to form in my head, the verses just…well, happened. They came together so naturally that I decided that the only way I could tell this story was in a series of bouncy rhymes, hopefully thus ensuring that the parents reading aloud would enjoy it as much as the children who were listening to them.

As the story came together, I would ‘try it out’ on my kids at bedtime whenever I had a new verse. My wife even suggested asking them to input ideas for more of the story arc. So, naturally, I did. “If a moth was to fly to the moon, what do you think he would see?” I asked one night. “A giraffe!” My little girl replied. So I have to credit the creation of the zoo scene in ‘It’s A Long Way To The Moon’ to her.

So here I am, a horror writer on one side and a children’s author on the other. Light and dark. Quite possibly, a perfect balance. One side I use as a form a therapy, to write away the tensions and stresses of everyday life. The other I use to bring peace, if not only to myself then hopefully to others who join my little moth friend on his journey.

And I owe it all to not only my wife and children – my own moon and stars – but to inspiration itself, which found me as it fluttered out of my lounge door on a dark, dark night.

‘It’s a Long Way to the Moon’ by Chris Tetreault-Blay, illustrated by Greg Carter, is available now!