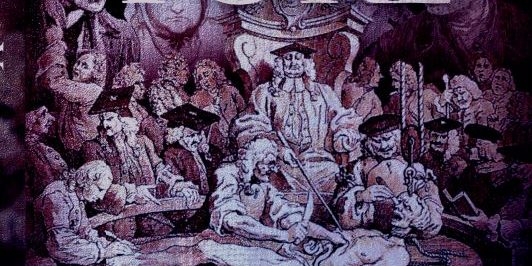 David Lawrence-Young has just signed his third title with Cranthorpe Millner! So here’s a little insight into David and his creative process.

Villains of Yore, by David Lawrence-Young, is available now from all major retailers. Look out for his other upcoming titles too – Colonel Blood and Kill the King! & Other Conspiracies.

In David’s own words:

Apart from writing the occasional article for school and university magazines, my creative writing career started when I became an English and history teacher. I taught history and EFL – English as a Foreign Language – in Jerusalem for over 40 years and in doing so found myself writing a lot of my own material. This was because I needed stories to stress certain aspects of the language, such as vocabulary, grammar, how to write conversations etc. I found that I enjoyed this creative aspect of writing and apart from writing a thriller based on Macbeth, this creative writing developed into the writing of historical novels. Since I started writing in the late 1990s, I have written over twenty historical novels ranging from Anglo-Saxon times to the 20th century. My latest book, VILLAINS OF YORE, published by Cranthorpe Millner is the only book I have written that has combined criminals and history together.

Besides enjoying the creative process, writing has brought me into contact with many different and interesting people. Several years ago I had a meeting with the Chancellor of Corpus Christi College, Cambridge, about the background for my novel on Christopher Marlowe. I chatted with World War 2 veterans about their exploits for my novel Of Guns, Revenge and Hope and through my first novel, Tolpudde, A Novel of Heroism, I have become good friends with one of the descendants of the Tolpuddle Martyrs.

In searching for a strong element of verisimilitude in my writing, I have visited many places that have been the backgrounds for my plots. These have included battlefields, medieval churches and cathedrals as well as old houses such as Holbeach Hall in Staffordshire. This is where the fleeing Gunpowder Plotters had their final shoot-out with King James I’s soldiers. I visited this building, which is now a rest home for the elderly, as part of my ‘hands-on’ research while writing my novel Fawkes and the Gunpowder Plot. I also had a very interesting trip to Sarajevo in the Balkans in preparation for my World War 1 novel, Two Bullets in Sarajevo. Naturally, having written four novels about Shakespeare, I have also made several visits to Stratford-upon-Avon and other Shakespearean sites.

As for where I get my ideas – I get them from everywhere. I wrote my novel about the first mass escape from the Botany Bay convict colony in the 1790s after reading a history of Australia, (my wife is from Melbourne). I was inspired to write I, Master Shakespeare after reading a disappointing book about the Bard’s life, an experience which made me feel that I could do better. My best-selling novel, Anne of Cleves – Unbeloved, was written because I thought that this virtually unknown fourth wife of Henry VIII had been left in the shade, especially in comparison with the king’s first two wives, Catherine of Aragon and Anne Boleyn. The idea of writing VILLAINS OF YORE came to me after I had read an article in a history magazine about the history of crime and criminals in Britain. I enjoyed writing this book the most of all of my books in terms of writing and researching. Although I love English history, what can compare with writing about such nefarious characters as Dick Turpin, Moll Cutpurse and the pair of villainous murderers-for- profit, Burke and Hare?

Finally, I would like to thank Kirsty Jackson and all the team at Cranthorpe Millner for taking on my villainous project and for producing a fine book as a result. I hope to be sending them more in the future.