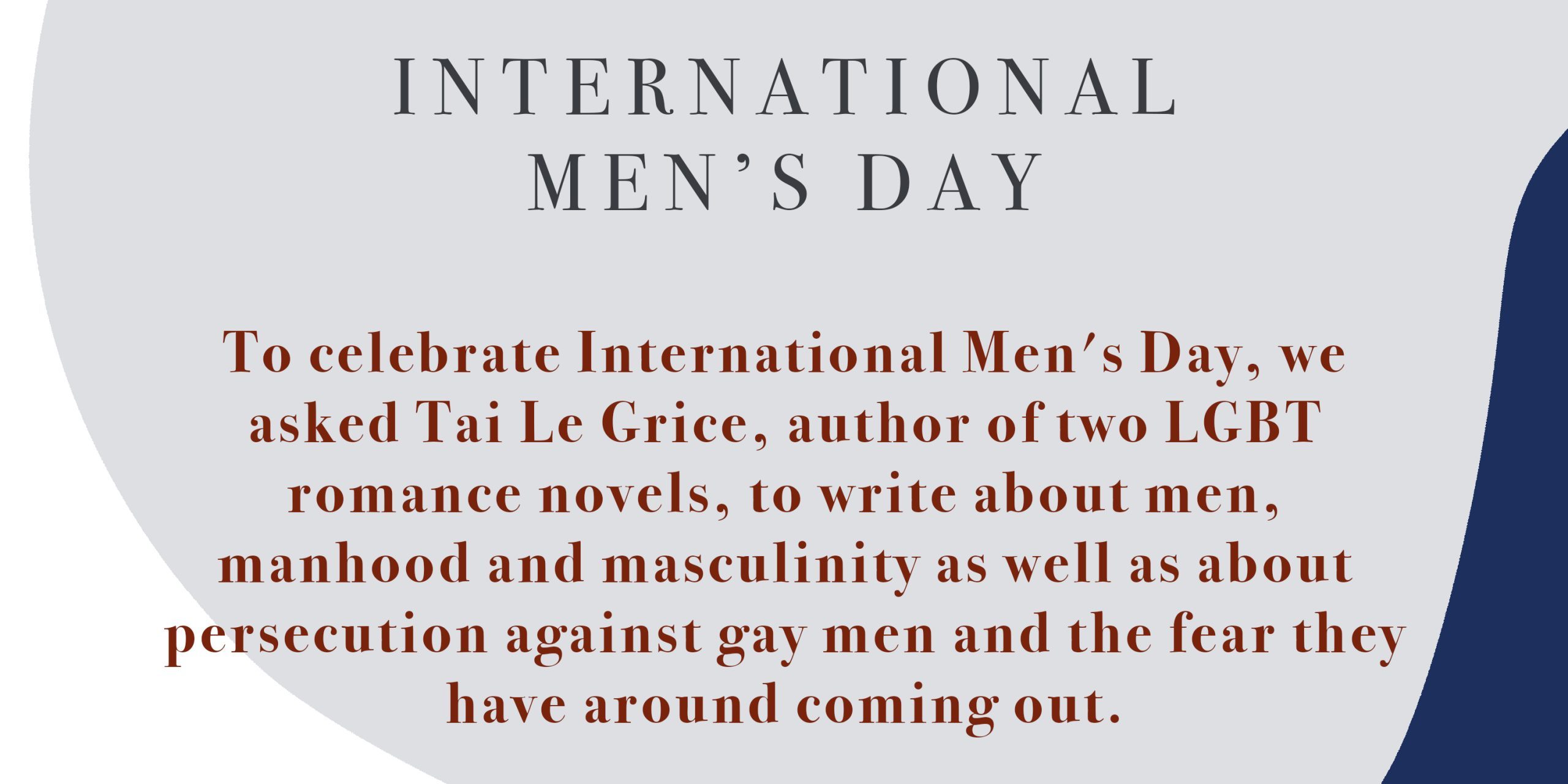 To celebrate International Men’s Day, we asked Tai Le Grice, author of two LGBT romance novels, to write about men, manhood and masculinity as well as about persecution against gay men and the fear they have around coming out.

When I was first asked to write a contribution for International Men’s Day, I had no hesitation in accepting and was confident the words would come easily. After all, the subject of men and their place in society (and our hearts) is one I personally hold dear.

However, once it came time to actually commit words to paper, I found myself struggling. Part of the problem was that I’m a writer of stories, not essays, and the other part was that I simply didn’t know where to begin. Oddly enough, however, sit me down with coffee and opportunity and I have no shortage of opinions on the matter so what follows is a modified transcript of what could easily constitute one of those stream-of-consciousness discussions.

I’ve been around at least long ago to see a great number of changes to the way our society views men, women, and sexuality as a whole. I supported the drive in my own country for law reforms on behalf of gay rights back in 1985, though I had little comprehension of what it actually meant only believing that all forms of discrimination were wrong, and I also recall very clearly struggling with the convoluted concepts of the feminist movement as I witnessed it then, and still struggle with it today.

You might well ask, why am I mentioning women’s rights when the topic here is supposed to be in relation to men? Because the two are intertwinable. And what happens to women cannot help but have an impact on men.

In a way, I see the women’s rights movement as having it far easier. There is a single clearly defined goal: women deserve equal rights to men and deserve to command the same respect based on their needs, abilities, and desires. In New Zealand, they might have had a slightly easier journey than in many other countries, out of simple necessity. It’s nothing unusual to see women working side-by-side with men in what might in other places be considered male-dominated jobs although equal labour rights are still a matter of contention. That said, women have had a great deal more freedom to act as they wish for a great deal longer than perhaps anywhere else.

For men, the situation is more complex. It isn’t merely about their rights to express their sexual orientation, it’s about what constitutes their right to express their own concept of masculinity. It’s as if there are only two options: gay, or not. And there is no in-between.

I’ve watched young men who are clear about their orientation and who are confident in their self-expression step boldly out into the world without hesitation and without repercussion. On the flipside, however, I’ve watched those who are uncertain struggle because their hesitation and uncertainty can’t be accepted. One of those hallmark traits of being a man apparently, is that a man should always be bold, regardless of for which team he’s pitching.

And therein lies the problem.

Back to the women. Women tend (and I mean this to mean as a larger social group and not in individual clusters) stick together and accept that if you’re a woman, you’re a woman, and women stand united against the tyranny of men. Men don’t appear to operate the same way. In many ways, they also have an internal judgment system, based on the pre-described societal norm. Whether we like to admit it or not, men are still separated into two distinct groups; masculine or effeminate, with no grey areas accepted.  And effeminate still means weak.

Building an all-encompassing society that accepts all its components equally is a responsibility that begins with every single individual. If you’re a feminist, that’s your right and women deserve their voices. But that doesn’t mean that if a man opens a door for a woman, he is automatically denying a woman’s rights. He might actually have respect for women! (Would a woman deny that open door if it was held by another, perhaps younger, woman?) And if a man chooses to wear make-up or express his fashion sense, does that automatically make him gay?

Being a man is not about his appearance, his job, his fashion, or his personal interests. He shouldn’t be obliged to drink, swear, split logs, and have an all-encompassing passion for blood-sports. There needs to come a point where society as a whole can accept that every individual has their right to self-expression and that the shades of our existence are not mono-chromatic. All of us come in the shades of the rainbow, no matter what body we were born into. If our young men making their way into the world now are to have any chance of accepting themselves for who they are, we all need to be able to accept their choices. Not all men-men are chauvinist A-holes and not all gentle men are gay. There is so much talk about not pigeon-holing, not assigning labels on account of stereotyping and yet, in a way, the pigeonholes have simply increased in number.

In conclusion, I can only say I speak from what I’ve personally seen and experienced. The women who have literally grabbed doors and slammed them in men’s faces with a curse about their chauvinism. The young men beaten on their way home from a party for looking queer. The boys urged to harden up because they’re supposed to be men. If we’re not going to lose an entire generation to confusion, it is up to all of us to accept that we all have our place and good men remain good men. Period.