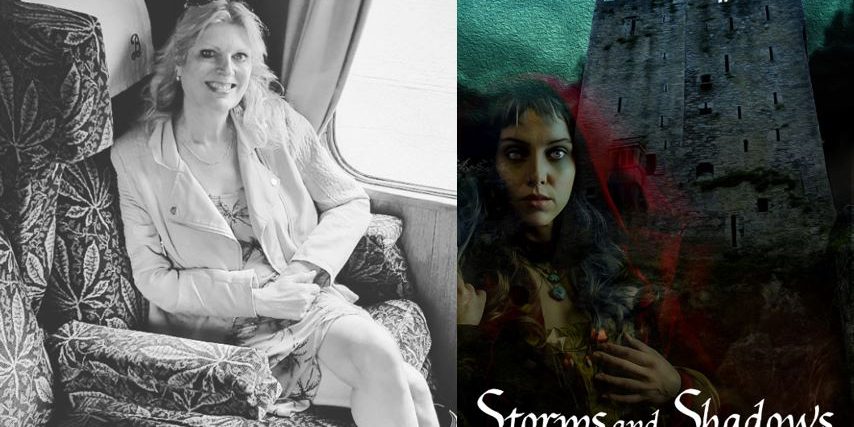 Julie Anne Gates is the author of Storms and Shadows, available from our site, Amazon, Waterstones and Foyles!

May I start by saying one thing: I am no historian. My talent was always art. My future was never on the tracks to be an academic one, it was an artistic one. I was a dreamer, an artist, even a bit of a poet, but not an academic, everyone was firmly agreed on that. And so, when I was offered a job in an art studio straight after school it seemed to be the perfect solution for me. Further education, even art college, was ruled out because it meant I would be back in the system, and I didn’t get the system because my head was firmly in the clouds or I was off down the garden with the fairies in a world of my own. All I needed was my tubes of watercolours, paper, and a collection of expensive, different grade sable brushes and I would be happy forever, wouldn’t I? Well, no. I wouldn’t be.

The realisation that I could further my own education did not occur to me until later, and that was only because I began to realise that I had grown up a lot and there was more to me than just painting cute little pictures of people’s dogs. To that end I enrolled at night school to take exams in History and English Literature. Encouraged and surprised by passing these I left my job and enrolled at college to do a legal secretarial course.  Roll on some years and I had a new life and a new career and I had met my then husband and settled down with children. It was only later when the children were older that I decided to enrol at a certain establishment to do a degree because I had discovered a deep love of medieval history through years of picking up anything remotely related the subject and reading it. Sadly, although I made good progress in my foundation and first year, in the next I found myself under the tutelage of a professor who had clearly decided that I was some sort of scatter-brained airhead who did not belong in the world of academia. If I raised my hand to ask a question, he was of the opinion it was really because I needed to be excused to powder my nose or sob in the corridor because I couldn’t grasp his exposition on the use of alliteration as opposed to onomatopoeia as a predominant structure in poetry.

I suppose it was always going to be like that for me. If I mentioned that I wanted to write a novel people would look at me in surprise and then humour me. But by this time that was exactly what I was going to do. And, peculiarly, it was because of that particular professor that I went ahead and did it. By then I had just enough knowledge about the benefits of studying primary texts as apposed to secondary texts, how to access research and academic papers from libraries and on-line etc (by then we had access to Wikipedia, Google, and many other online resources which was unheard of only a decade earlier).  I had also already settled on the subject of my novel because of my interest in law, medieval history, my vast private library of books on the history of anything from medieval kings to medieval clothes and cookery, and above all because of my proximity to some of the sites that governed the story. I had also aware that Matilda de Braose was becoming a predominant feature in my research. With all this in mind I sat the exam for that last module, passed with good marks and decided that I was not going to waste my time and money any more, I was going to further my own education and conclude it with what I liked to think of as a `thesis’ in the form of a novel, and that novel was Storms and Shadows.

Writing all this down now brings it all to home. As I said earlier, I was never considered academic and therefore I let people’s expectations (or lack of them) influence my life to a certain degree. But what others hadn’t counted on, but I did, was the fact that, yes, I was a bit of a dreamer, definitely an artist and poet, but that I was also actually a bit of a closet academic in the sense that I stored lots of facts, figures, and interesting theories I had read quietly along the way and stored them in some recess of my mind with the view to using them later. And use them I did. I used them to make myself feel better about myself. I never got that degree, some said I gave up, but I didn’t really. The only thing I gave up on was the belief that I wouldn’t be dismissed by others in my life as simply an arty type with a flighty brain and not much common sense. And so I studied my chosen subject on my own. I bought all the books, did all the readings, read all the related texts I could as well as visiting the places and talking to the people who had officially studied History, Medieval Law, Medieval Cookery etc. You name it, I studied it. I even went to jousts and re-enactments to add flavour and excitement to my studies. And do you know that when I started writing Storms and Shadows, I discovered one completely profound thing – that writing is not so different to painting, only you paint in words and not in watercolour or oil. The depth of field, the perspective, the darkness, the shadows, the light and intensity are all there, but it’s the reader that has to use his/her imagination to bring it to life. You’re still the artist, but you’re the artist of their imagination and that is worth more than any degree to me.