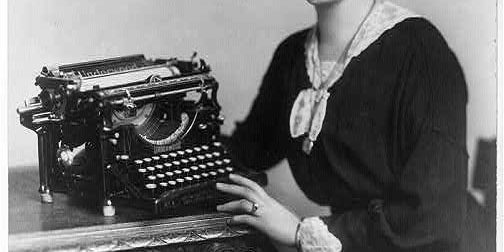 I am sure anyone reading this will have heard of the Time’s Up movement. Founded in January 2018 by a handful of Hollywood celebrities, it has now raised over $20 million for its legal defence. It is a ground-breaking movement created by a group of individuals who are changing history by changing legislation. It is empowering and inspirational to be able to see real people making real change, and it makes me stop and remember women who needed change like this in their own day, the trailblazers who inspired the fight in us today.

It is hard to imagine when I consider the outstanding female novelists who I have grown up with, read, studied, laughed and cried with, that so many of these women have long gone neglected or forgotten entirely by history and literary canon. Firstly because these writers helped shape history, but secondly for all the reasons they resonate so profoundly with me as a writer and as a woman. I am proud to have grown up with them and to have been taught by them and I take the legacy they left us very seriously.

Why are they so compelling? These were educated women – something still regarded with suspicion – who were expected to do nothing more than marry and have children. They had been born into prosperous, respectful families, had been allowed a first-rate education, had been encouraged to think and speak out, but only until they found themselves a husband. From then on, it was only through domesticity could they find an outlet.

The resurrection of neglected women novelists is something that, in the last thirty years or so, many people have taken to with commendable vigour, indeed it is the raison d’etre of many publishing houses, most notably Virago. However, it could be argued that this resurrection has largely ignored noncanonical women novelists, turning them aside because they are judged by modern criteria such as their degree of feminism or subversiveness and come up short. These writers focus on the household as the site of adventure, and although their heroines might explore other options, they ultimately return home once again. These writers are excluded from literary canon because of their unfashionable commitment to marriage and domesticity. And yet, the manner in which they focus on marriage seems to contest and deconstruct it, often at the expense of men, leaving a strong undercurrent of contempt for men as a whole.

It is no surprise these women became active suffragists, when they lived in a world with few rights, under the absolute dominion of men, and although they were intelligent enough to know their own mind, they were not allowed a voice. Is it any wonder their voices were quiet, their themes domestic? As author Judith Kinghorn puts it, ‘it is that quietness which enriches and, strangely, empowers the voice; that magnification of domesticity, of lives confined by gender and time, which illuminates the ordinary and makes it extraordinary.’

Every writer worth their salt knows you cannot hope to succeed with your writing without understanding, respecting and emulating those who went before you. As a woman, I feel that resonates especially deeply, but that is of course not to say it is only so for female writers. No writers whose work was dazzling or influential should have been mostly forgotten or overlooked, either because of their gender, the language in which they wrote, or any other reason we have not imagined.

Jean Rhys – mid-twentieth century novelist who grew up on the Caribbean island of Dominica, she is possibly best known for her novel Wide Sargasso Sea which depicts the first hand account of the poor wife Mr Rochester keeps hidden in his attic, painting a very different picture to that which we see in Jane Eyre.

Stella Benson – From author Yiyun Li: ‘The day after the election, I was reading Benson’s work, and sent this passage to a friend: “Poor man measures all things by the size of his own foot. He looks complacently at the print of his boot in the mud, and notices that the ant which he crushed was not nearly as big as his foot, therefore the ant does not matter to him. He also notices that those same feet of his would not be able to walk to the moon within a reasonable time, therefore the moon does not matter for him.” Fortunately, the moon and the ant both matter to Benson.’

Margaret Oliphant – Scottish novelist, she wrote historical novels, novels which concerned domestic realism and tales of the supernatural. Unhappily married to her cousin, who died of consumption, leaving her and her children with very little, she published over one hundred novels, earning just enough success to ultimately sustain her family.